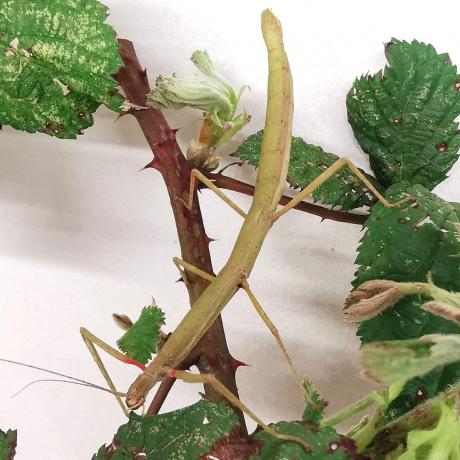 The common, Indian or laboratory stick insect is a species of Phasmatodea (phasmid) that is often kept by schools and individuals as pets.

This species has a cylindrical shaped body and reaches adult lengths of up to 8cm. Overall the body colour is a yellowish-green to brown and the forelegs have red patches at their base.

These insects have an unusual defensive strategy and when they feel threatened will go rigid and fall to the ground.

Where are Indian Stick Insects from?

They were originally collected in Tamil Nadu, India, but in captivity cultures of Carausius morosus have been around for decades.

How do you keep Indian Stick Insects?

Housing this species is very easy, they require a simple mesh or screen cage of at least 30cm in height (to allow for successful moulting) and can be kept quite satisfactorily at a room temperature of 20-24 C (68 -75 F). If temperatures drop below this for long periods then some external heating equipment may be required.

Provide a moderate level of humidity by spraying the enclosure at least twice weekly with a hand or pressure sprayer. You will find stick insects drink moisture from the food plant leaves and benefit from the increased humidity when moulting their skin.

Substrate is not necessary for most stick insect species and can actually cause difficulties when cleaning them out and collecting eggs. It can also cause mould to form across the surface with the regular dropping of excrement. For this species, use paper towels or newspaper on the bottom of the enclosure as it’s easy to change and inexpensive.

Indian stick insects will eat a variety of different plant matter including, Privet, Ivy, Hawthorn, Bramble, Rose, Oak and Hazel (we favour Privet and Ivy for this species). Collect the food from areas where pesticides are unlikely to have been used and cut the stems to approximately the correct height for the enclosure. Place your chosen food type in an empty glass jar half filled with water, this will prevent the plant matter from wilting. Change the food weekly or more frequently if required.

Indian stick insects will reproduce in captivity even in the absence of a male, this is called parthenogenetic reproduction. Mature females will lay unfertilised eggs, that will still develop and hatch into nymphs without mating ever taking place. Any of the offspring produced asexually will be female and are often clones of their parents.

When females reach adulthood they will begin to lay relatively small numbers of round eggs (ova) around 2mm in size, over their lifetime this can add up to hundreds. The ova are dark brown in colour and look like seeds. They can be carefully collected from the bottom of the cage and separated from any fallen plant matter and dried faeces; using small tweezers.

Incubate the ova on dry tissue or vermiculite in a sealed container at room temperature. They normally take four months or more to hatch. If you don’t wish to incubate them, dispose of them humanely by freezing them shortly after laying. 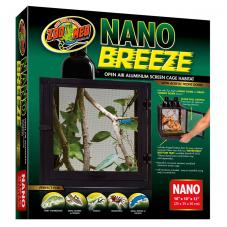 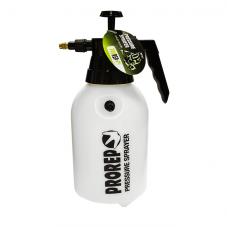