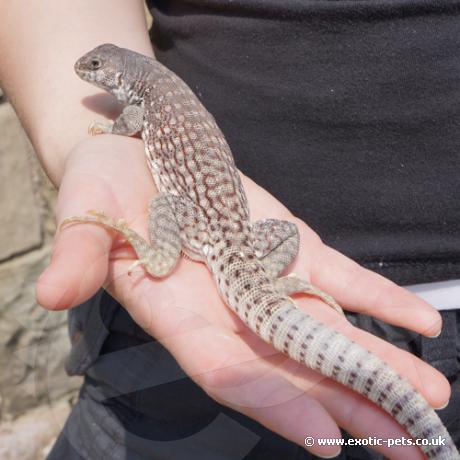 Desert Iguanas live in hot arid, sandy areas of Mojave and Sonoran deserts of southeastern California, southern Nevada and western Arizona. They are a medium sized lizard reaching a total length of 16 inches.

The Desert Iguana is a medium sized lizard reaching a length of up to 41cm (16 inches), including the tail. The tail is one and half times longer than the body. The body is pale beige to grey with red to brown patterning; this gives the lizard an appearance of a darker body with lighter circler markings. The tail has a banded look; the underside is pale, however during the breeding season the sides can have a pinkish look. The head of the Desert Iguana is blunt looking; a row of enlarged scales are present from the neck to the tip of the tail giving a crest like appearance.

Where are Desert Iguanas from?

Desert Iguanas thrive in hot sandy deserts and scrublands. They are still active when other species of lizards retreat into burrows due to the intense heat. They are the most common lizard of the Sonoran and Mojave deserts of the Southwestern United States and Northwestern Mexico.

How do you keep a Desert Iguana?

Being a terrestrial species, floor space is more important than height; however they will climb if given the chance. We would recommend using the VivExotic Large Vivarium to house an adult or the X-Large for a sexed pair.

A deep layer of sand should be used, you can also provide areas with clay sand to allow the lizard to dig and make a burrow. Another option is to place caves under the sand with just the entrance showing giving the Desert Iguana a sense of security. Other décor within the enclosure should consist of rocks, caves and some low branches.

Heating and lighting of the enclosure can be a maintained a number of ways; this is our method and we feel this is far better in regards to the cost and ease of the equipment. By using a Mercury Bulb on a reflector this will give a high basking area along with an overall high background temperature. At night simply turn this off and allow temperature to drop. The Mercury Bulb will also give the Desert Iguana the UVB it requires. There is no need for thermostats, additional heating or lighting!

If you do not wish to use this method, these are the temperature which the Desert Iguana should be maintained at. Provide a basking area of 40C (104F), they can withstand a higher temperature of 46C (115F) but it shouldn’t exceed this as it can be fatal. The ambient daytime temperature should be around 26C (80F) with a night time drop down to 15C (60F).

Desert Iguanas are mainly folivores, meaning they feed on leaves and flowers. In the desert they would feed mainly on Creosote bushes and seasonal plants and fruits. In captivity feed a diet of leafy greens, dandelion leafs and flowers with added fruits. They will also occasionally take small numbers of mealworms. All feeds should be dusted with a vitamin and mineral supplement such as the Komodo Calcium with Vitamins for Herbivore or Repashy SuperVeggie. Place a small water dish in the enclosure; like most veg eating species of lizards, most of the moisture comes from the plants they eat.