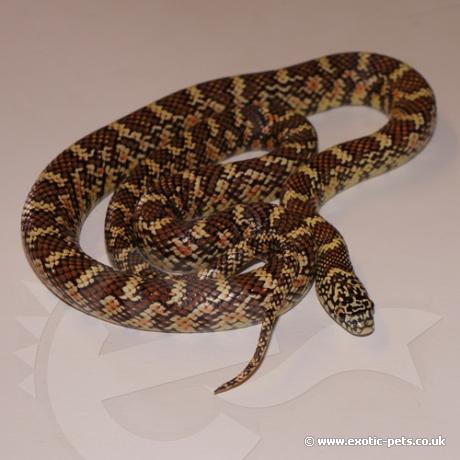 Brooks King Snakes was originally thought to be a subspecies of the Florida King Snake. In recent years, they are now classed as location of the wild-collected adults. We, along with others in the hobby, have decided to keep them listed as Brooks.

The Brooks King Snake is a thick-bodied colubrid that reaches an average length of 4-6ft. Due to their great appetites, owners tend to use these as a ‘dustbin’ for uneaten rodents which will increase their size and they can become overweight if not carefully monitored.

The Colour and patterning of Brooks King Snakes are where it becomes interesting. Babies are generally black-bodied with thin cream/yellow bands along the back, this then breaks up into a further side pattern that is consistent along the body. Some babies will have orange/red scales within the side patterning, the amount of red varies depending on each specimen. As the animal grows, the black and red pigmentation starts to fade and the animal seems to then have a cream/yellow base colour with slightly darker speckling. Some of the nicest looking Brooks King Snakes are so speckled you struggle to see the bands. This doesn’t mean if your snake stays a darker colour that it isn’t what we would class as a ‘Brooks’ as again, this is merely where the animals were originally collected many years ago.

They have a typical King Snake shaped head that has no clear jawline as if the head and neck are one. The eyes are large and due to their head patterning, it gives the snakes a constant frowning appearance. Babies can have some attitude and will quickly rear and strike out, however, this tends to disappear as the snake grows. Handling can also make the baby snake go to the loo, again, something that it will quickly outgrow with gentle handling.

Where are Brooks King Snakes from?

The ‘Brooks’ are found in the Southern parts of Florida such as the Miami Rim Rock, Dade County and in the Southern Everglades. They can be found along the canal paths that cut through the everglades, in grasslands or farmland. They are diurnal (active during the day), however, they will hide at the hottest part of the day and become active at dusk.

How do you keep a Brooks King Snake?

Young snakes are best kept in a 2ft enclosure and adults housed in a 4ft vivarium. The use of a heat mat connected to a pulse thermostat in the smaller enclosure will allow the snake enough warmth to help digest their food. In the larger vivarium, the use of a ceramic lamp, protected by a guard and connected to a pulse/dimming thermostat is the best way to increase the air temperature and provide a nice basking area.

In the wild, the summer months of May to October range between 30-32C (86-90F) with a nighttime drop down to 22-26C (72-76F). The temperatures then drop dramatically to their lowest in January with a daytime high of 24C (75F) and a nighttime low of 15C (59F). During the winter months, keepers looking to breed will cease feeding and drop to these temperatures. If you are not looking to breed, we would still recommend lowering the temperatures slightly as this will allow your snake to go through its natural seasonal cycle.

Studies have shown that all snakes benefit from the use of UVB within their enclosures and are readily seen basking under them. The Brooks King Snakes requires a zone 1 on the Fergason Scale. A low UVB bulb should be provided along with guards to prevent any accidental damage to the fixture or burns to the snake.

The substrate can be in the form of aspen, lignocel or if you wish to provide a more natural look, a soil/sand mix to mimic the snakes’ natural environment. Providing plenty of enrichment such as hides, branches and plants will allow the snake to feel secure and be more active within the enclosure. A snake with just one or two hides will hide all day, whereas a snake with lots of coverage, leaf litter and places to climb will be more active.

In the wild, Brooks King Snakes would eat a variety of prey items from rodents, lizards and other snakes including venomous ones. This being said, NEVER house two King Snakes together even if they are the same size. If one becomes hungry, the other will end up being its lunch!

A hatchling will generally be fed on day-old pinkie but soon move to larger pinkies within a couple of months. Increase the size of the prey as the snake grows, an adult will easily take an extra-large mouse. Keep a feeding record so you can monitor the snake’s progress and frequency of taking food. Ideally, a young snake needs feeding every 5-7 days, this can then go to 7-10 days when the animal is one to two years of age, then 10-14 days when a matured adult at around four years. Ensure not to overfeed as obesity is highly possible due to their big appetite. You may also want to feed in an alternative enclosure to prevent any vivarium aggression.

Always provide fresh water and allow the snake to fully submerge in its water bowl, this is important when coming to shed its skin. A light listing of water in the snake enclosure in the morning will mimic mourning due. 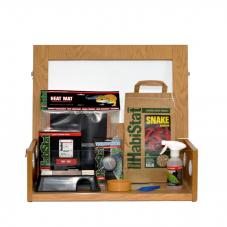