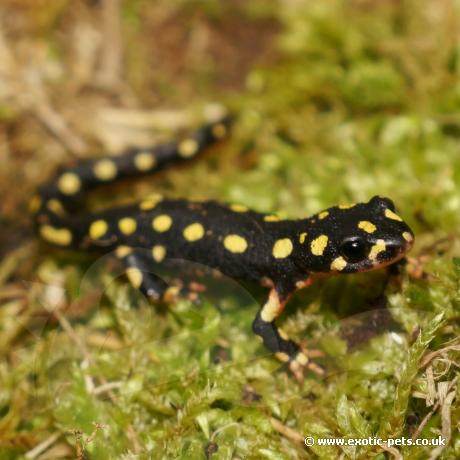 The Yellow Spotted or Lake Urmia Newt can be found in montane areas in the middle east. They have a very distinctive appearance and are highly sought after by serious amphibian keepers.

This stunning slim newt looks very similar to a Fire Salamander at quick glance, however they have a granular skin due to being aquatic. The body is jet black with bright yellow spots with the underside varying from cream to a pink colour. The pink colouration is noticeable on the toes and around the newts lips.

Where are Yellow Spotted Newts from?

Yellow Spotted Newts can be found living in either shallow freshwater rock pools or deep ponds throughout most of the year. Only during midsummer will the newts burrow down to escape the higher temperatures. They inhabit montane areas of the middle east; Iran and Iraq into Turkey and Israel.

How do you keep Yellow Spotted Newts?

These newts should be kept in a paludarium setup (aquatic and land), ideally a bio-active setup would work best with live plants. Being mainly aquatic, the water area wants to be the largest part around 75% of the enclosure. A strong flowing current can be managed by building a water feature that runs down into a pond. The main water depth shouldn’t be any lower than 10cm but no deeper than 30cm. Rocks and pebbles should be placed around the water’s edge and in the pond with a few plants, they do not like too much foliage in the water.

The land area preferably wants to be a bio-active substrate with plenty of rocks and hides. They will leave the water area but remember, that they are mainly aquatic. Live plants can offer cover and make this look more natural. A low UVB lighting should be provided but no basking area is required as they prefer lower temperatures. Water temperature doesn’t require any additional heating; this should stay between 12-16C (53.6-61F).

Being slow growing, Yellow Spotted Newts do not eat much compared to other species. They will feed on a variety of insects, mainly from the water as they will stay suspended near the surface taking advantage of the prey’s mishaps. You can feed them small chopped earthworms; they will rarely accept these on land but will take them in the water. Ensure insects are well gut loaded before feeding and dust with calcium and vitamins as directed.