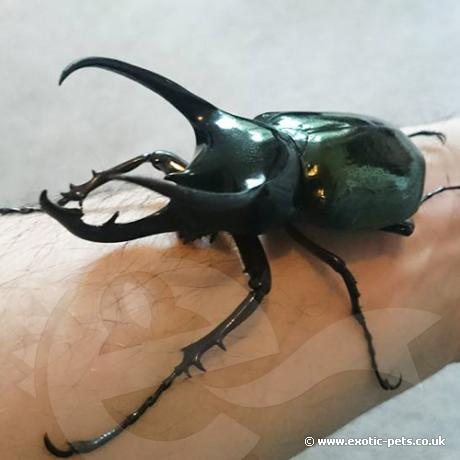 The Dynastinae subfamily are among the largest of beetles with some species reaching impressive sizes of up to 17cm in length. Their common name derives from the characteristic horn on the males of the species.

There are over 300 known species of Rhinoceros Beetles or Dynastinae with the biggest ones reaching lengths of up to 17cm, however this size is rare among captive specimens.

Rhino Beetles are sexually dimorphic with males having characteristic horns. These are commonly used in territory disputes with other males over mating sites or food. Female Rhino Beetles are usually smaller bodied than males.

Adult Rhino Beetles bodies are ordinarily a muted colouration of black, brown, green or red however there are some colourful exceptions such as (Dynastes granti) or (Eupatorus gracilicorni).

Where are Rhinoceros Beetles from?

Rhino Beetles are found throughout Central, South America, South Asia and Africa. There is also one species found in Europe (Oryctes nasicornis).

How do you Rhinoceros Beetles?

Rhino Beetles are nocturnal animals and do not require any special heating/lighting equipment. However natural daylight entering into the room where your animals are kept is advisable to provide a natural photoperiod.

Temperatures should be kept within the range of 20-25 °C for most species. Heat mats should not be used with Rhino Beetles as they naturally bury themselves into the cool ground to escape heat and secondly it will also lead to the desiccation of the substrate. Humidity needs to be maintained around 70-80% but remember that you are looking to keep a damp but not wet substrate.

Adult Rhino Beetles can be housed in suitable plastic or glass terrariums either singular, in pairs or in sexed groups. When considering a terrarium remember that you need to provide a substrate depth of 20cm or more and with an optimum substrate mix of ProRep Beetle Grub (Type 1) and (Type 2) in the ratio of 2:1. Climbing furnishings can be added to the terrarium along with live moss.

To make things simple we also offer a ProRep Rhino Beetle Rearing Kit which is suitable for both raising larvae and keeping small adults singular. Adult Rhino Beetles naturally feed on fruit and tree sap however in captivity it is commonly accepted to feed your adult beetles solely on beetle jellies. The beetles will still obtain all the necessary nutrients they require from the jellies and have many benefits including their long shelf life and the fact they do not attract fruit flies. 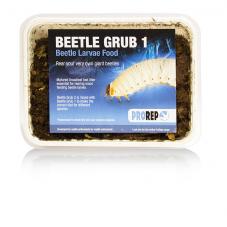