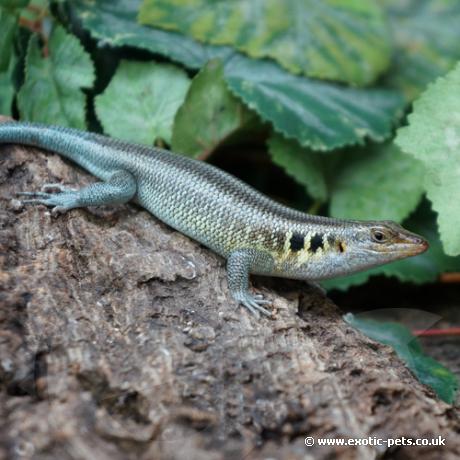 Rainbow Skinks can be found in areas of East Africa, from Kenya down to Mozambique. They can generally be found living in open Savannah and within rock crevices.

A typical skink appearance; long body and tail with a short head and thick neck. They have been recorded to reach a maximum of 30cm total length however 22-28cm is the average size.

Sexing of the Rainbow Skink is easily identified by colouration. Adult males have a bronze to turquoise body with small speckles of white. On either side of the neck, approximately three large black blotches are present with yellow to orange coloured scales around the black marks. Female and juveniles have a dark brown to black body with three cream to yellow striped running from the head to the tail. The tail is blue with black striped, this may fade in large adult females to dull olive-brown.

Where are Rainbow Skinks from?

Rainbow Skinks are found basking on rock outcrops or even buildings; the dominate male will have a prominent position keeping watch for any other males in their territory. They are found in a few areas of Africa, Kenya, Central Tanzania and South-East Tanzania. They live in a savannah area within rocky hills, they will hide and sleep within the rock fissures.

How do you keep a Rainbow Skink?

Rainbow Skinks do best in small groups consisting of one male and several females. To keep a pair or trio we recommend keeping these in a minimum 48x24x24” vivarium due to their active nature.

These are heavy basking animals and we believe they will benefit from a higher percentage UVB light source, therefore we recommend a 10% UVB. A basking area protected by a heater guard and connected to either a pulse or dimming thermostat should be placed at one end of the enclosure, this can be a basking lamp or ceramic bulb. Temperatures are pretty consistent throughout the year according to reports; 27-31C (81-88F) during the day with 22-24C (72-75F) at night.

Use a sand/soil mix or even a clay burrowing substrate. Place a number of rocks and branches around the enclosure, they will sit in view basking under the heat lamp, a few artificial plants won’t go a miss either.

The heavy rainy season is during March to May; some rain is also expected in October to January. If you were to spray during these months, it may help breeding this species in captivity. They lay between 3-10 eggs, some have been known to share nest sites.

Rainbow Skinks will feed on a range of insects and have been known to attack smaller lizards. Dust livefood insects with a calcium and vitamin supplement at least twice a week.