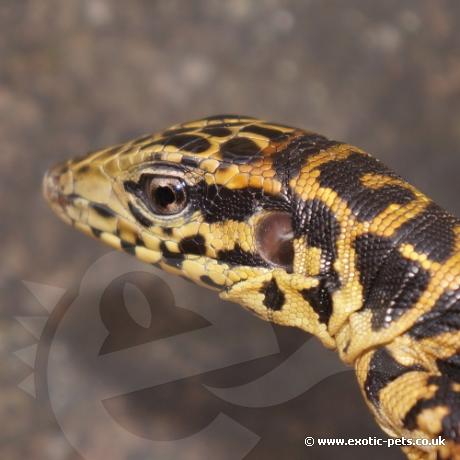 The Golden Tegu or Colombian Tegu reaches an adult length of up to 90cm. They have a overall glossy appearance across their body and have thick limbs and tail. They are native to South America and Panama.

Golden Tegus or Colombian Tegus are heavy bodied, large powerful lizards. On average they grow to be 2ft-3.5ft long, nose to tail tip, with males being bigger and bulkier than the females. They also weigh around 3-4kg once adult, which is typically the size of small breed dog. Upon appearance Golden Tegus are truly beautiful, with their gold speckled colouration and thick black bands running along their body. Even though they have thick scales they have a glossy sheen, almost like they’ve had a good polish.

Where do Golden Tegus come from?

This particular species of Tegu prefers a tropical environment and they can be found throughout the forests of Northern and Central South America as well as Panama. They do not hibernate like some of their close relatives and though they may be beautiful they do often come with a bad attitude, but with time and patience some do tame down.

How do I keep Golden Tegus?

Due to their size Golden Tegus would be best housed in a wooden vivarium. The minimum size for an adult Tegu would be 6ft x 2ft x 2ft however the bigger the better. Floor space for this species is much more appreciated than height, and if given the opportunity Golden Tegus will burrow so we do advise a good deep based substrate. Personally we tend use a soil based substrate mixed with live moss and coarse orchid bark, as we find this holds humidity well.
When selecting décor even for babies its best to go for sturdy objects that will be capable of holding the weight of the Tegu. For babies natural or artificial basking platforms are perfect as both a hide and for basking. For adults cork branches, java branches or bamboo logs not only look good in the enclosure but they also last longer too.
A high spectrum UVB light should be provided and is essential for their growth and development. Arcadia T5 lighting Units would be ideal in a large enclosure was they can be screwed in place so that the Tegu cant pull it down.
For heating we would recommend two heat sources for large enclosures to help meet their temperature requirements. A heat light such as a high wattage flood light or deep heat projector can be used inside the enclosure connected to a dimming thermostat. A ceramic light alongside this connected to a thermostat will help boost the temperature of the enclosure and the ceramic can also be used for night time heating. Both bulbs should be well secured to the top of the enclosure with a heat guard around them to prevent the Tegu from burning itself on the bulbs. Average daytime temperature should remain around 85-90F with a basking spot around 95F. Night time temperatures can drop to 70F.
Humidity should maintain around 60-80%. This can be achieved by having a large water bowl within the enclosure and occasionally misting the enclosure a few times a week.
Golden Tegus are omnivore’s and will consume as much food as you give them, this can often lead to health issues such as obesity if fed the incorrect diet. We highly recommend a varied diet including insects such as Roaches, Crickets and Morio-worms, as well as mice, other raw meats and eggs. We have also found baby and also juvenile monitors will also gladly feed on Arcadia Omnigold too. Supplementing their meals with calcium powder and vitamin powder will also prove beneficial to their health.
Do your research
Before you commit to buying any pet, please do your own independent research.