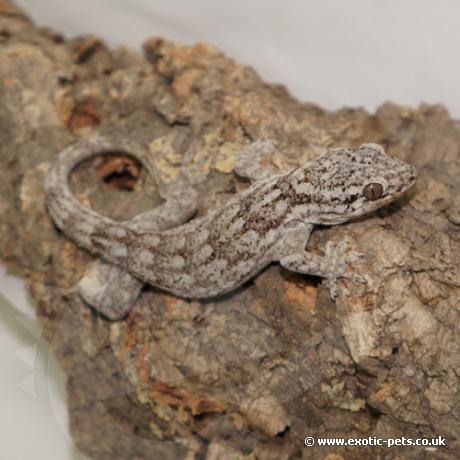 The Giant Madagascan Velvet Gecko is a large species reaching an adult length of 25cm. Their body is mottled allowing them to camouflage on tree trunks.

What does a Giant Madagascan Velvet Gecko look like?

The general base colour of this gecko varies between light brown and dark gray, with darker colored markings forming a mottled effect, similar to the bark of a tree, found all over the back which they use as camouflage when resting. They may also present a series of black dots in no particular order with the belly being very light, almost white.

Adult male Blaesodactylus sakalava may achieve lengths of 20 - 25cm, while adult females tend to be somewhat smaller in both length and build.

Starting from the neck and spreading down to the tail this gecko usually presents a series of small protruding scales or tubercles similar to those found on a leopard gecko, despite these protrusions however, the skin of the Blaesodactylus sakalava is silky smooth to the touch, hence their common name the Giant Velvet Gecko.

Where are Giant Madagascan Velvet Geckos from?

Blaesodactylus sakalava hail from the island of Madagascar. They are one of four different Blaesodactylus sub groups which are native to the island. The sakalava however are the most common sub group and can be found in the forested areas in the south and all along the western edges of the island.

How do I keep Giant Madagascan Velvet Gecko?

Being arboreal geckos the Blaesodactylus will need a terrarium which is vertically oriented rather than horizontally, a juvenile or yearling specimen would live quite happily in an Exo Terra 30x30x45 although they will use all of the climbing space provided for them, therefore a 45x45x60 terrarium would be perfect for an adult gecko and ample should a female be introduced for breeding.

The terrarium should be set up as a forest type environment with branches placed at varying angles to allow options for the geckos to perch and rest. The terrarium should be well planted with real or artificial plants or a combination of both, to provide several hiding places for the geckos, this is particularly important if more than one gecko is housed in the enclosure. In my experience, these geckos seem to prefer rough bark surfaces for perching and resting so cork bark would be an excellent addition to the terrarium furnishings. Rough surfaces also aid with the animals shedding.

These geckos do not tend to drink from a water bowl so several times a day it is recommended that the terrarium be sprayed with water. This will help to keep the humidity levels up and allow the geckos to drink the water droplets from the leaves or the sides of the terrarium should they feel the need. Although spraying is important, the Blaesodactylus sakalava do not require extreme levels of humidity, therefore the terrarium should be allowed to dry out between spraying.

Providing heating for Blaesodactylus is fairly simple as they do well at temperatures between around 20 and 30C, similar to that of a crested gecko. Constant temperatures above 31C are detrimental to these geckos and should be avoided. Temperatures between 17C in the cooler months and 30C in the warmer months are acceptable, so long as the gecko can choose to move to a warmer/cooler area to thermoregulate its body temperature. It is important to note that long periods kept at below 15C are also detrimental to the geckos. If kept at cold temperatures for extended periods of time the gecko will be unable to digest its food, its metabolism will slow almost to a stop and its body will begin to 'shut-down'.

Being nocturnal, some keepers will say that these geckos do not require any type of lighting, however in the wild they would obviously be exposed to a photo period so this should be recreated within the terrarium. A 2.0 UVB bulb would suffice here, and care should be taken when setting up the terrarium to allow several areas which are shaded from the light as these geckos do not have eyelids so will need to physically move to an area of shade when resting during the daylight hours. Aim for a photo period of about 10/12 hours in summer and 8/10 in the winter. An LED night light is useful for the night time period so the geckos can be observed hunting and exploring.

The staple diet of these geckos should be gutloaded crickets or roaches although they will accept most appropriately sized insects. Large adult Blaesodactylus may also accept the occasional pinkie mouse. Some, although not all Blaesodactylus sakalava will accept mashed up mango and bananas also. Adults of the species do not require calcium supplements in their diets although neonates and juveniles do seem to benefit from it. For younger specimens, gutloaded prey items should be dusted with a suitable calcium supplement every other feeding. If UVB lighting is used in the enclosure, reduce this to every 3rd or 4th feeding until the gecko reaches adulthood.