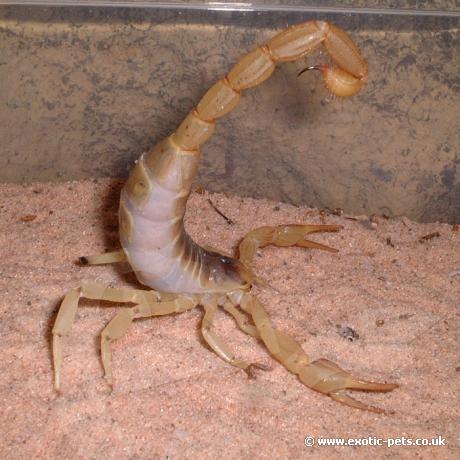 A very popular medium sized scorpion found in the Mojave and Sonora deserts. Previous scorpion experience is advisable as these animals have a fairly painful sting.

The desert hairy scorpion is straw yellow in colour, with a black body stopping at the head which is the same straw yellow colour as the rest of the scorpion. On their tails they have small brown erect hairs, which is where they get there name from.  They tend to get to an average size of 14cm (5.5inches).

Where are Desert Hairy Scorpions from?

The desert hairy scorpion is distributed throughout Mojave and Sonora deserts. It is found in the Western two thirds of Arizona, the Mojave Desert regions of southern Nevada, Southern California and to the extreme south west of Utah also found in the Colorado Desert. In Mexico the species' range flanks the Sea of Cortez in Sonora and Baja California Norte.

How do you keep Desert Hairy Scorpions?

Ideally you will want something that opens from the top as they are known to be good escape artists. For a single adult, a plastic tank or glass tank can be used which is around 18x12x12 (length x width x height) length being more preferable to height.

Desert hairy scorpions are keen burrowers, spending most of their time in a hole. They are found in extreme desert terrain so it is recommended to use a base of sand for substrate. Décor isn’t really that important but a hide made from cork bark, slate or rock will start off as their base but then will soon becomes the start for their burrow. If you choose to (I do) you can have fake plants etc. to make the tank look nice.  Avoid using real plants as this will up the humidity and that truly is the main weakness for this particular species. Also the new Exo-Terra skull range add a different side to that natural desert look.

Babies can be kept in a something such as a small braplast tub.

Being a desert scorpion they like it rather warm, around 30-34c for the hot end. The cool end can be room temperature as the scorpion will regulate its own temperature.  You can either use a light bulb/heat bulb or ceramic bulb in the top of the vivarium; this will raise the ambient air temperature (preferred method). Or you can stick a heat mat to one side of the vivarium to warm the ground temperature. It is vital you never put the heat mat underneath the vivarium for scorpions as they will often burrow to escape the heat meaning they end up burrowing further toward the heat source.

Humidity is the enemy of this species, avoid it at all costs. Make sure there is plenty of ventilation within your vivarium. Don’t worry about watering your scorpion they have adapted to get water from their prey.

They can be an aggressive scorpion and are often able to take down prey their own size. Feed them a combination of crickets, locusts, and cockroaches. For the size of the prey, try not to go above half the size of the desert hairy scorpions body. Feed it 1-2 times per week, sometimes you may see it patrolling the tank looking for food (tail arched, pincers wide) throw in a cricket etc. and watch the show.

I wouldn’t recommend handling. scorpions (like tarantulas) are more of a viewing pet, one to just leave in the tank and let it be. If you do need to get it out of its tank for any reason, then I suggest coaxing it into a plastic tub like the one crickets are purchased in then shutting the lid.

I find this particular species of scorpion wonderful to keep and I personally prefer it to the emperor scorpion. Unlike the emperor scorpion (which I have owned) the desert hairy scorpion is a lot more active and can often be seen guarding its burrow. If you want to see a scorpion catch and sting is prey then I recommend owning a Hadrurus arizonensis