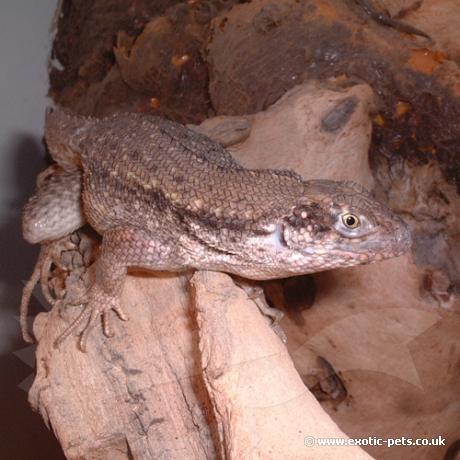 The Curly Tail Lizard has the correct name as its tail curls over its back. They are a small species growing to 100-180mm (4-7 inch) and can be found in Peru, the Caribbean and Cuba.

Curly tail lizards are a fascinating species and although some may be a little dullish in colour they certainly have plenty of character. On average Curly tail’s reach seven inches in length, with females being smaller than the males. Some sub species have even been recorded at eleven inches.
Depending on their local a Curly Tail Lizard’s colour can vary from a dullish grey brown tone to some even showing flecks of yellow along the sides of their body.
These lizards can often be recognised in the wild for their Curling tail, as when they feel threatened, scared or trying to scare off another male they curly their tail inwards and back outwards, similar to that of a scorpion. To other lizards and even some birds this can deter them from trying to eat them.

Where do Curly Tail Lizards come from?

Trinidad and Cuba have been found to be home to several sub species of Curly Tail’s, however most species now found within the pet trade have originated from the Bahamas. Curly Tail’s tend to favour arid and rocky environments, so this should be taken into account when it comes to housing.
Females have been found living around each other in the wild and they can be housed together in captivity. Males however should be housed alone or with other females.

How do I keep a Curly Tail Lizard?

When housing Curly Tail Lizards its important to try and provide them with an enclosure big enough for them to explore and also climb a little too. Though they are ground dwelling lizards, in the wild they can be found climbing rocks and broken tree branches. The enclosure needs to be nice and hot so ideally we recommend a wooden vivarium at least 3ft in size, if you want to use a bigger enclosure that’s even better.
As they are also active during the day a UVB light is essential to help with their bone development and D3 synthesis. If you are using a Mercury vapour bulb inside the enclosure please check this isn’t too warm as they can NOT be connected to a thermostat. A digital thermometer will give you an accurate reading.
If you are using a separate UVB and heat source, its best to use a heat light connected to a dimming thermostat to help with temperature control. Basking temperatures for this species should be around 98-105F(36C-40C), the cool area should be around 80F(26C-27C) and a night time drop around 70F(21c).
A sand and soil based substrate would be best to use, as this helps replicate their natural environment and allows them to express natural behaviours. If you find your Curly Tail Lizard buries itself in the sand this is natural thing for them to do, as in the wild when the sun goes down they do often bury below the sand to hide from predators or they sleep between rocks or branches.
For decor we have personally found Curly Tails love to climb on cork branches and tubes. You can also use resin hides and caves for them to hide under and also sit on to bask below the heat and UVB lights.
Depending on how you want the enclosure to look you can also go for trailing or standing plants, skulls and much more.
When it comes to feeding, Curly Tail Lizards are omnivorous and they will eat a variety of food including insects, flowers, fruit and in the wild even smaller lizards. We always recommend using good quality Calcium and Vitamin supplements such as Arcadia EarthPro-A and Arcadia Eathpro-CA, at least 3times a week for the Calcium and twice a week for Vitamins. Gut loading live food also makes them more nutritious for your lizard.
A medium or large water bowl should also be left in the enclosure and cleaned daily.
Do your research
Before you commit to buying any pet, please do your own independent research.