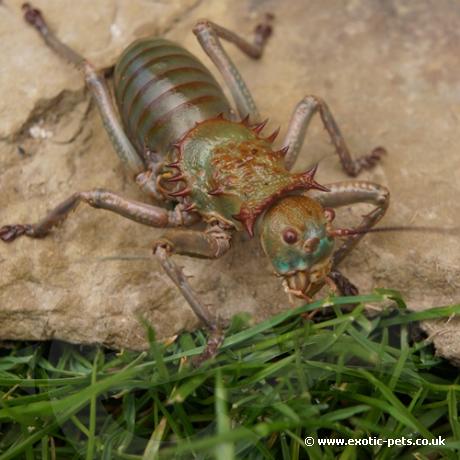 The African Armoured Cricket can come in different colours, however, the species we tend to see is generally a brown to olive green colouration. On the thorax and legs, small sharp spikes are present giving it's name of the Armoured Cricket. They have large powerful jaws, capable of giving a painful bite if threatened.

Sexing this species is easy from around 2-3cm. Females have an egg laying probe at the base of the abdomen and tend to be more plump in body and size compared to males.

When the Armoured Cricket is being attached, they have two bizarre methods to deter the predator. One is to regurgitate its recently eaten food, the second it to squirt blood - this is called haemolymph. Males will also make a load noise by rubbing their body parts together called stridulation.

Where are African Armoured Crickets from?

These crickets are classed as a pest in Africa and many are killed with poisoned bait placed around crop fields. They feed on millet and sorghum and can become cannibalistic if lacking in protein or salt.

How do you keep African Armoured Crickets?

We would recommend keeping this species separate due to their cannibalistic nature and only putting them together if intending to breed.

To house an adult, a plastic tank of 35x20x25 is ideal. Use a soil/sand mix for the flooring and provide areas for climbing and hiding in the form of reptile caves and cork bark. Daytime temperatures range between 23-27C (73-80F) with night time around 15-19C (59-66F). This can be provided with either a basking light or a heat mat placed on one side of the tank. All heating elements should be connected to a thermostat to prevent over heating.

African Armoured Crickets will feed on a variety of vegetation, along with cat/dog biscuits and pre-killed insects. Introduce a number of foods and see which they like. Provide a small water dish with either a drinking sponge or cotton wool to prevent drowning, you can also lightly mist the enclosure a few times a week.

For further information on the Armoured Cricket, please see the BBC Earth News.